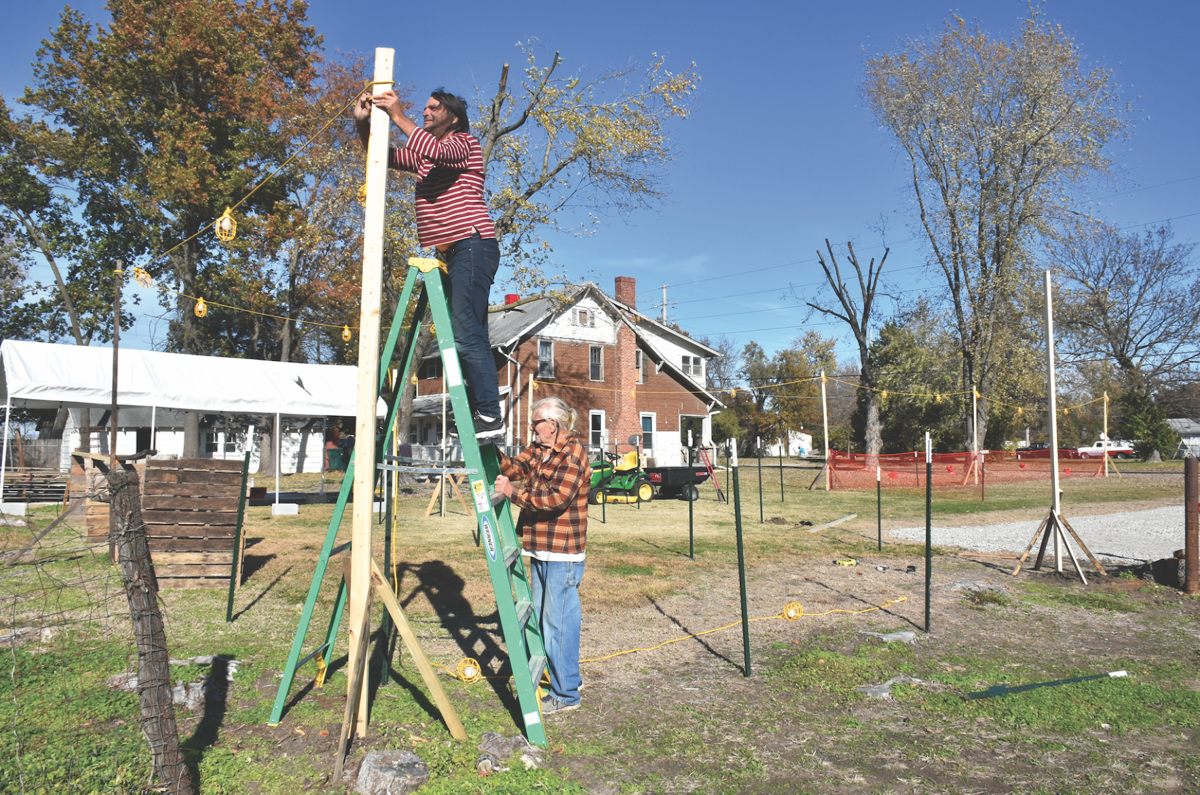 Arvon Swanberg holds the ladder for James Hard, as Hard hooks a string of lights to one of the temporary poles they erected around their Christmas tree lot in preparation for Friday’s opening of JAlly Farms, LLC, Christmas Tree Farm and Pumpkin Patch, 510 N. 32nd, in Parsons. 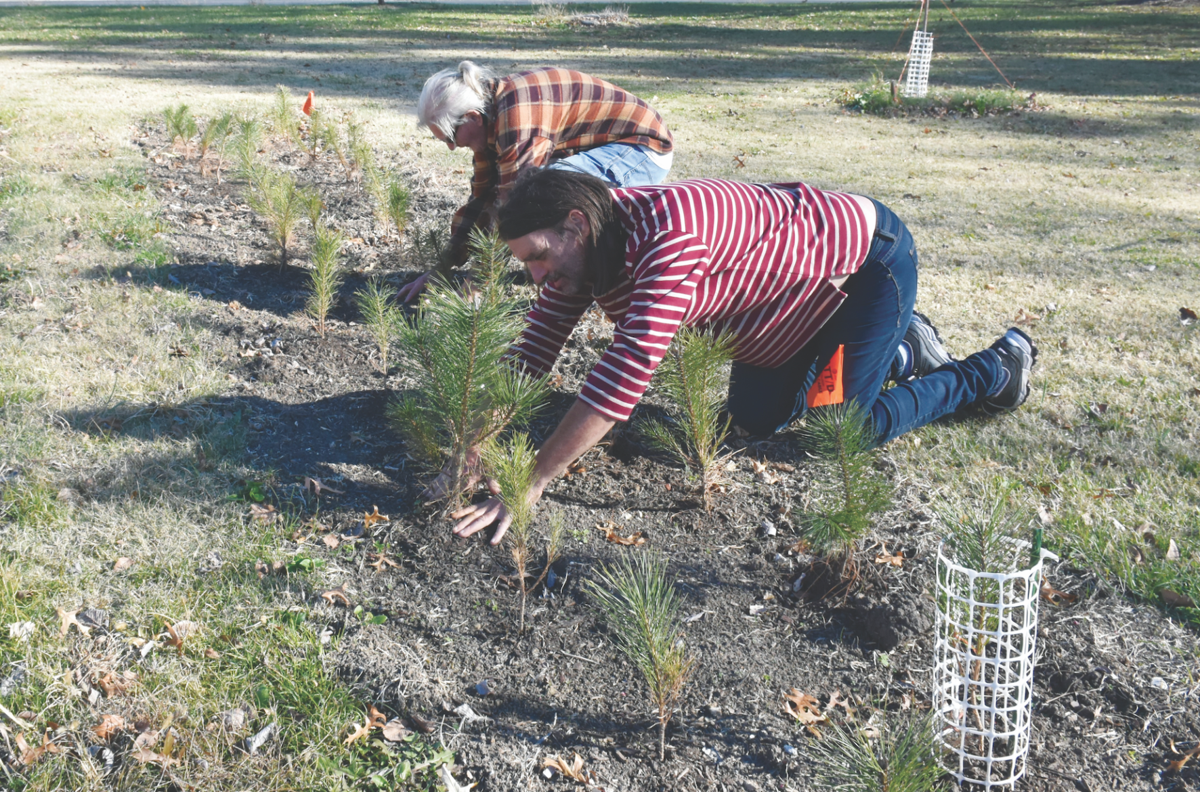 Arvon Swanberg and James Hard check the Christmas tree seedlings in their nursery area at JAlly Farms, LLC. The seedlings had to be nurtured for two to three years in the nursery area before being transplanted. 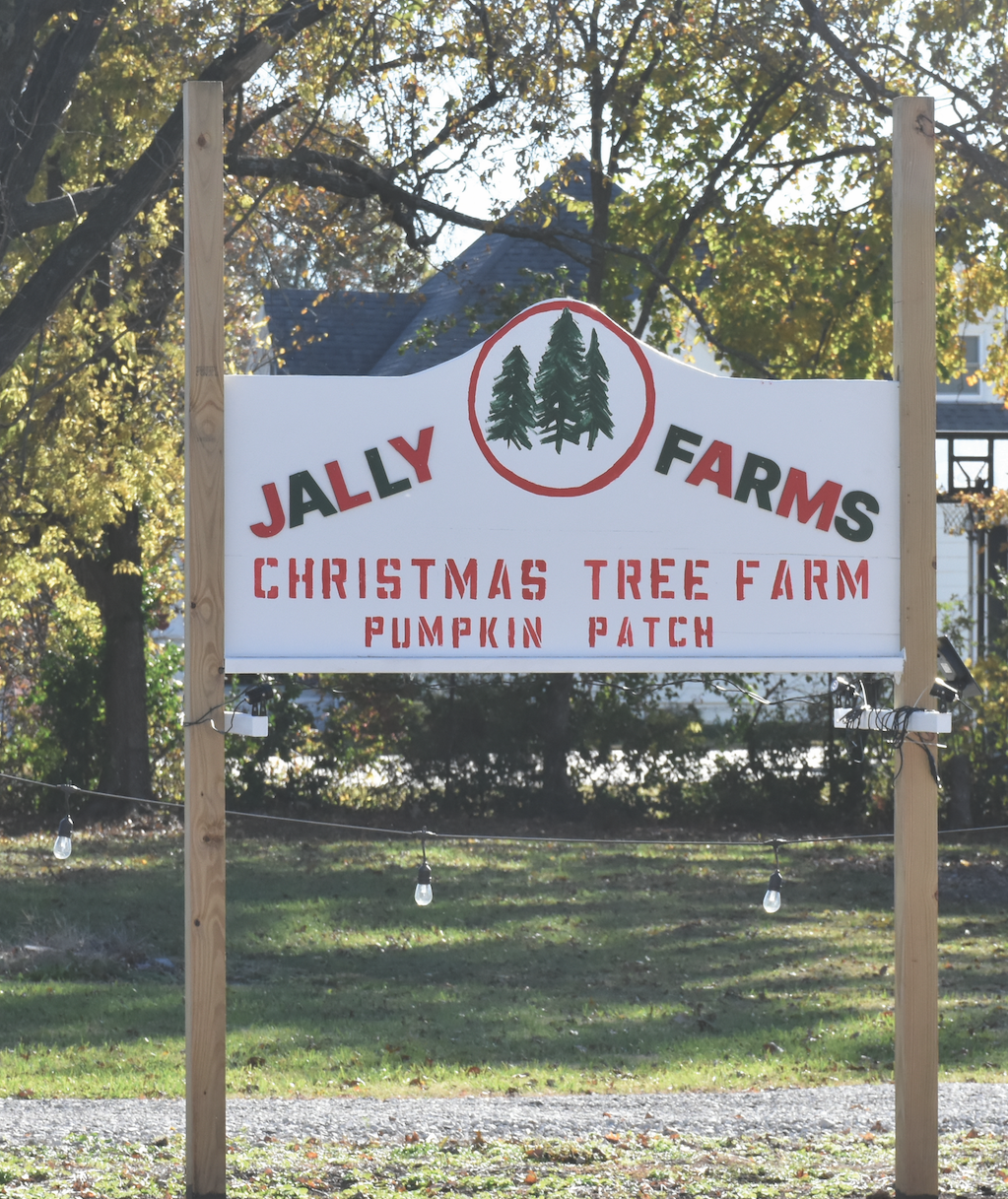 Arvon Swanberg holds the ladder for James Hard, as Hard hooks a string of lights to one of the temporary poles they erected around their Christmas tree lot in preparation for Friday’s opening of JAlly Farms, LLC, Christmas Tree Farm and Pumpkin Patch, 510 N. 32nd, in Parsons.

Arvon Swanberg and James Hard check the Christmas tree seedlings in their nursery area at JAlly Farms, LLC. The seedlings had to be nurtured for two to three years in the nursery area before being transplanted.

Arvon Swanberg held the ladder for James Hard, as Hard hooked a string of lights to one of the temporary poles around their Christmas tree lot in preparation for opening day Friday at JAlly Farms, LLC, Christmas Tree Farm and Pumpkin Patch in Parsons.

The two were excited for this next step in their new business venture they have worked nearly three years to reach, after they said they lost nearly everything in Hurricane Irma.

Hard told the story of how he had sold his sailboat and was staying with Swanberg on his sailboat. Things were going well for a while for the roommates until they sailed down to Fort Myers Beach, Florida.

“We were anchored out there and then the hurricane came,” Swanberg said of Irma.

Their sailboat was one of 50,000 destroyed in that storm.

Hard’s mother lives in Fort Worth, Texas, so they grabbed what they had left and stayed with her about a year, planning what they were going to do next and where.

“I don’t know what happened, or how I really got interested in it, but all of the sudden I’m looking up on YouTube and seeing Christmas tree farms and I looked into that,” Hard said.

He began researching, and the more he researched the more interested he became. He went to Swanberg with his idea, and Swanberg was in for the adventure. The next step was deciding where. The cost of living in Fort Worth was high and the price of land untouchable for the two. They got on the computer and sought out real estate agents and came across one in Joplin who had a property listed in Parsons.

The house was old and run down, the property was covered in trees and underbrush, and the overflow from Prairie West pond runs through the back acreage.

The owners turned down their offer. The two kept looking and then one day saw the owners of the property in Parsons had dropped the price $7,000, placing it within a few thousand dollars of what the men had offered.

“That put it right in our price range,” Swanberg said. “We came right back up and we bought it.”

“The first year we were here is when it rained like 120 inches, or seemed like it,” Hard said, laughing. “It seemed like the rain would never stop, and we were like, ‘Wow, what did we get into?’”

“This place used to be the old Freeberg place,” Swanberg said. “It was nothing but a jungle.”

It took them about a year and a half to get the place cleaned up to establish a Christmas tree farm and pumpkin patch. Swanberg pointed to the back of the property to the south, sharing that they now have some older trees planted in that area.

“And he’s got some planted up here,” Arvon said, pointing to a small plot acting as a nursery area for seedlings, where they remain for two or three years before being transplanted to the back field.

“You need to really take care of them when they are small like that,” Hard said. “We have these up here so we can keep an eye on them a lot better than back there, so if they need something we can give it to them.”

Some people think a tree farm involves planting and forgetting them, but Hard said the work is extensive. The trees have to be cared for, and Christmas trees have to be pruned and shaped, in addition to dealing with pests and disease that could threaten their investment.

“I came into this knowing nothing about planting trees or growing trees. … We just take it one step at a time,” Hard said. “There are a lot of other tree farms where people got into it not knowing anything about agriculture. And two or three years later they are doing fine.”

Hard nodded to a large plot on the south side of the property where they grow pumpkins and decorative gourds to sell in the fall. They were open for a few days this fall. Having expanded their plot, they are hoping to have much more to offer in the fall of 2022.

It is a step-by-step process.

“This is really his project. I’m kind of the handyman,” Swanberg said. “This is my retirement. See, I’m 84 years old.”

“But I know 20 year olds that can’t do what he does,” Hard said of his friend.

Op-Ed: Flood readiness improves in some states, but much of U.S. remains vulnerable

While living on the ocean and in a warmer climate for years, the two are adjusting to working through the colder falls and winters of Kansas. Swanberg said he was born and raised on a farm in northern Illinois so is coming back in to what he knew in his youth. Hard said he comes from a military family, and he has lived all over the place, including numerous places in Europe.

“I love the snow actually,” Hard said. “I wish it would snow a lot more than it actually does. I used to live up in Alaska, and it would snow so much there we’d have to get out the second story window.”

As the property has transformed, the men have been encouraged.

“From the neighbors and everyone all around, we get such comments on what this place has really turned into,” Swanberg said. “It makes the subdivision (Prairie West) look a lot better not to have, excuse the language, but a crappy looking place right next to it.”

“The reason we took a chance on this place is because it is in town. You don’t find many acreages in town, and if you did, like in Joplin, you’re gonna pay,” Swanberg said. “Here we got it and there’s really no Christmas tree farms around close.”

“I think it is a pretty good location for one,” Swanberg said.

It will take their trees several years to grow, so in the meantime they are shipping in Fraser fir trees from the Carolinas.

“We’ll have to be ordering for the next three or four years,” Swanberg said.

Their tree lot is more temporary this first year. They plan to make improvements. A little further into the future, they want to put up a building beside the lot and call it The Elf’s Workshop.

“It’s going to be beautiful inside, and I’m supposed to be the old elf. I’ll have my corner where I’m working on stuff,” Swanberg said. “”We’re going to sell all kinds of stuff in there, including homemade stuff. That’s in the future.”

“We have a lot of plans for this place,“ Hard said. “We just can’t pull it off the first year of doing it.”

Also, they want to build a bridge over the overflow area so they can drive a tractor over it and people can walk from the front to the back to cut a Christmas tree if they want to.

“We’re actually going to be a choose and cut Christmas tree farm,” Hard said. “We just don’t have trees old enough or big enough yet for people to come in and cut them.”

They will be open from 3 to 8 p.m. Monday through Friday and Saturday and Sunday from 10 a.m. to 8 p.m. until they sell out of trees.

If there isn’t a large number of customers, they said they will stay inside their house, especially if it is cold. They will be watching for customers, and if no one comes out right away, customers can honk their horn to let them know they are there.

They do have tree stands for purchase, and they plan to offer free coffee, hot apple cider and hot chocolate to shoppers.

For people traveling no more than 15 minutes away, they will cut the end of the tree.

“You always want to cut (a little) off the bottom of the tree, because the sap will run down there and harden up and it won’t be able to suck up any water. So we will cut the last half inch or so off if they are going within 15 minutes away. If they are going further, I would suggest they do that before setting up their tree,” Hard said.

“I’ve also got a baler,” Hard said. “We will do free baling for the trees so they can put it on top of their car and take it home.”

“It’s kind of (an) experiment this year,” Swanberg said. “It’s quite an undertaking, but it is something I enjoy doing.”

“We’ll see what we can do and learn from it and see if we can do better next year,” Hard said. “We’re a little limited on what we can do, but we haven’t done our full potential yet.”