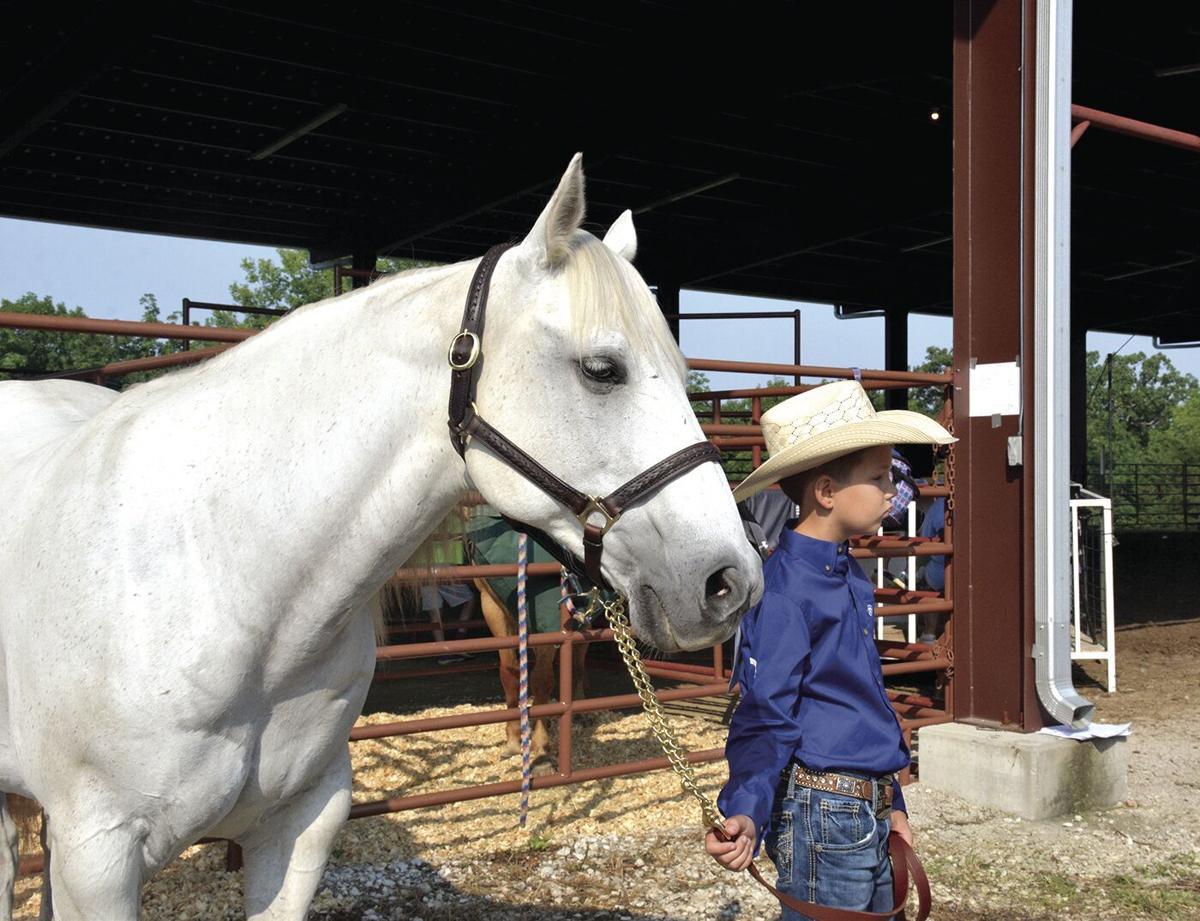 Colton Hanigan, 10, participated in the Labette County horse show for the first time this year with his horse Gus. 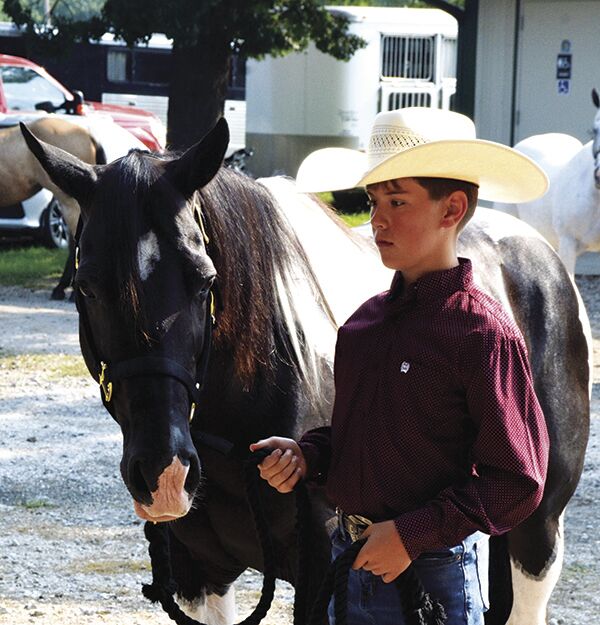 Conner Hanigan, 13, with his horse Curtis joined his brother, Colton, in participating in the horse show at the fair for the first time this year.

Colton Hanigan, 10, participated in the Labette County horse show for the first time this year with his horse Gus.

Conner Hanigan, 13, with his horse Curtis joined his brother, Colton, in participating in the horse show at the fair for the first time this year.

OSWEGO — Colton Hanigan, 10, and his brother, Conner Hanigan, 13, with Altamont Rooters 4-H, both entered the Labette County horse show for the first time this year.

One brother left the arena with purple ribbons and a smile, and one didn’t, but both left with a vast amount of experience that they will carry into the show next year, along with a healthy dose of determination.

Asked what he showed in the past, he said, one thing was “bucket calves, which is basically what I’m not doing now. They are annoying.”

He was thrilled for the switch to equines.

“We wanted to show horses for a long time, but we never had two horses. We had one, but he was getting old,” Conner said.

Since getting their horses in March, both boys have committed a lot of hours to working with their horses at home and with the 4-H Horse Club, investing time almost every day.

Conner said the show was pretty tough, especially getting his horse to stand still.

Some of those assisting and in the audience were surprised just how tough the judge was on the youths, handing out numerous red ribbons and straightforward criticism.

“You all need some work,” said horse judge Etta Smith of Helper, who works with Crawford County 4-H youths. “I know you all work at home and that horse does such a wonderful job, then you come to town and he blows it all. That means you need to get out. Take your horse to the neighbor and have the neighbor walk around you, anybody, your grandpa, your grandma. Just get them used to people walking around you. I know. I’ve been there and done that. You work them at home and they do so good, then you take them to town and they prance and they stomp and run over the judge. So, let’s do some work next year, all right?”

Nurse explains why she doesn't like the term 'healthcare hero'

Florida Gov. Ron DeSantis blames this for surge in cases

Melinda Taylor, 4-H Horse Club leader, said the Hanigan boys did just that, and whatever difficulties Conner faced with Curtis were not from lack of effort in working with his horse at home and with others.

“The Hanigans are brand new. They’ve done other species, but they’ve never done horses before. It’s different riding at home and different doing this stuff. Not everybody takes advantage of coming to the meetings, but the people that do want to learn.

“I keep organizing and we have meetings at the state hospital throughout the year. The riding meetings are from March or Aprilish through to the fair. We have times where they can just go up and ride in the arena to practice, and  then we have different people who come in and do different things with the kids throughout the season,” Taylor said. “The Hanigan boys are very good learners and very coachable. We had a mock show here last Sunday night.  We had just a couple of families that came, but they are the ones that came. My daughter (Meredith) was able to give them some last-minute pointers. … Now she is 25 and she shows at big stuff all over.”

The boys’ family watched from the bleachers as each showed in their classes.

“It was their first experience for it and they did well,” their father Nick Hanigan said. “We’re all learning. It’s a learning experience for all of us. It’s great for them, responsibility taking care of their animal, and watching them grow in their projects has been awesome, not just the horses but the other projects as well. The friends they’ve made in 4-H has been big, so that will be with them a long time, and the tasks they have to do with their projects have given them responsibility in knowing they have tasks to do each day.”

Both boys are having fun and Nick Hanigan said they love the competition, with others and one another.

“I loved it. It was fun,” the boys’ grandmother Sherry Harrell said. “We’re so proud of them.”

Most of the youths come back with the same horse year after year, which helps them to build a bond with their animal they do not get to do with other livestock they show at the fair.

“In all honesty the horses are one of the hardest things to bring to the fair. These other barns are full of kids who get to sell their animal at the end and they make good money. Our horse kids have to take their horse home and feed it all year,” Taylor said. “Someone told me they sent out a list to everyone in 4-H this year of all the kids that have a project that doesn’t get to sell at the premium sale and they said, ‘If you want to do some add-on money for these kids that would be really appreciated.’ I wish they would have done that years ago because by the time we would pay for shavings, even though my daughter would win grand, grand, grand, all day long, you only get $2 or $3 for a ribbon. She’d only get 15 or 20 bucks total and by the time we paid for shavings she’d be lucky to come out with $5. Then her friends were coming out with $2,000 because they sold a cow or hog.

“With horses, I think that is kind of why our numbers are going down a little bit because it is an expensive hobby and you don’t get anything out of it except a $2 ribbon,” Taylor said, speaking strictly to the financial benefit, as there are other benefits. “My daughter does it now. She shows ABRA (American Buckskin Registry Association), and we show in Tulsa and down in Oklahoma. You get a $2 ribbon and it costs her $500 to show for the weekend, so you have to love it to do it.”